I’ve always been a homebody. When I was a child I would relish in knowing I had a six week school holiday in the summer to rearrange the furniture in my bedroom, play tennis against the garage wall and watch Wimbledon with my family. As an adult I am fortunate enough to travel frequently with my work and, in many ways similar to how I felt when I was younger, I always look forward to returning to my home to nest. Yet as I grow older I have found myself having a deeper connection to the four walls in which I live. Not because my creative career means I’m intrenched in the latest trends or seasonal collections. Rather, I mean a connection of considered feelings and tangible differences in my growth as a person beyond the material or superficial. Over the last few years I have been thinking about the significance of how the meaning of Home has helped to shape the person I am, and the life I lead, today. After my husband (then boyfriend) and I graduated we moved numerous times across the country, navigating our way in and out of different neighbourhoods and cities as graduate schemes took our work to various parts of the country. Truth be told it never felt like we belonged – we were never in one place long enough to put down roots, to create a routine or make meaningful connections with the local community. I found this period challenging as I had been so blissfully happy during the previous three years at university after trickier teenage years. In fact, at that point in my life those Uni years had undoubtably been the best years of my life to date. Home felt like Home and I felt I had the freedom to start living life free from external shackles; free from walking predetermined and expected paths. It was during my time at university, from my first little room in halls of residence to the tiny room in which my other half and I slept, ate and worked for a year, that I started to evolve from a confused and slightly suffocated teenager into a young adult. However, it wasn’t until we moved into this apartment that I truly felt settled again like I had felt during my time at university. In fact, it was while I lived here that I found my feet: I learned hard lessons in business and friendship; I gained the confidence to quit a flourishing career in corporate communications to pursue my freelance work full-time; I hired a book agent and subsequently signed a worldwide book deal; our home ended up on the UK cover for the book and I went on an American book tour; my heartmate asked me to marry him – I said yes, and we ended up marrying just days before we moved out. I realise now that this was the perfect way to close out this chapter of our lives together, but when we both found out that we were going to have to move out of our home just days after getting married, it was a big shock. We both felt sick to our stomachs at the thought of saying goodbye to the home we had not only lovingly built together, but had grown so much in, both personally and together as a couple. 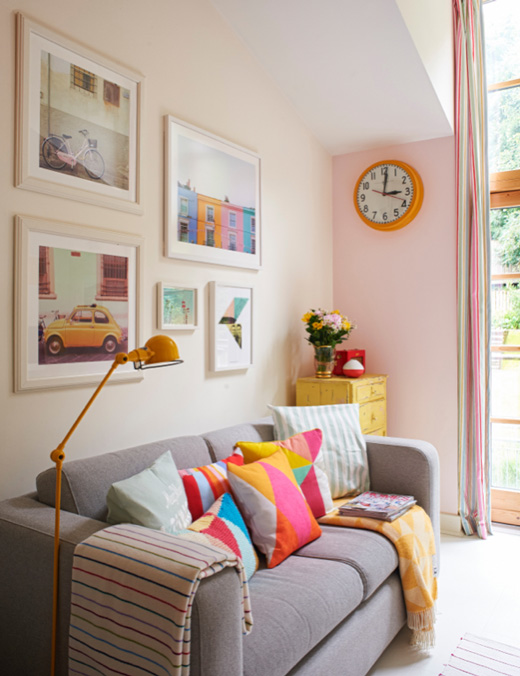 After a sleepless night we turned to one another, hugged tightly and both said: “Here’s to the next adventure”. From that moment we embraced the change and opportunity that had presented itself to us. Two days later we had found our new place, an oh-so-charming 17th Century cottage, and have now moved in. It’s exciting to be starting our married life together in a house steeped in so much history; we often lie in bed at night musing about all the different families and generations that have called our ‘new’ four walls Home over hundreds of years gone by. I feel blessed to be building a new home with my husband in such a richly historic building, and realised that it’s because of our love for one another it already feels like a Home, not just a house. It’s because we’re here together. And nothing else in this world feels better than that. See all of my apartment in my new book, along with fourteen other homes, which you can buy now from the following locations: Amazon USA / Barnes & Noble / Indiebound / Amazon UK.