From the moment I shared the news of our house purchase, I’ve been so excited to write this post. Whether for real houses or the sets of my favorite TV show, I’ve always geeked out over floor plans, so it feels incredibly exciting to now have floor plans for my first home. Over on my Instagram Story and on Facebook I’ve been sharing video updates throughout the project so far. You can watch the first video walk through to see the beach house stripped down to the studs, and the second video shows how the space looks now that the Sheetrock has gone up. This is the first of two posts as I decided to separate the downstairs and upstairs into individual updates. After the jump you’ll see the full before/after floor plans, plus loads of comparison photograph galleries of the beach house downstairs rooms. I think these really help to show which walls have come down, which have gone up, which windows are gone and so on. Gah, it’s so exciting! *Use the slider to see how the downstairs was laid out when be bought the house vs. now*

OK, let’s talk floor plans! When we first bought the beach house it had been flipped and turned into suburban-style family home for four. There was one master bedroom and three additional bedrooms which were all small and boxy, including one located downstairs. You can see this floor plan when the slider is all the way to the right. (I put placeholder furniture in both the before and after floor plans to help signify the different rooms.) If you pull the slider to the left you can see the structural changes we made downstairs. The main one was removing the dividing wall between the downstairs back bedroom and the living room to create one large living space. You’ll also see how we incorporated the built-in closet space from that back bedroom into the downstairs bathroom so as to allow for a walk-in shower. I’m really pleased we did this vs. giving the space back to the living room because a) we’re already gaining considerable living space from what was the bedroom itself and b) the way the living room narrows at the back of the house has made for a cozy TV viewing nook area, meaning we won’t have to have an ugly TV in the main living room, allowing for the new fireplace we have added in to be the star of the space. There’s more on alllll of this below. I can’t get over how just removing this one wall has transformed the entire feeling in the downstairs of the property. It’s turned two small and awkward rooms into one fantastic space! In the Facebook video tours of the house (part one and part two) I talked about how we had to remove a window to make way for the fireplace we wanted to add in the main living area. I knew that a fireplace would be perfect in the new living room but I was worried about the loss of natural light as a subsequence. However, I needn’t have worried because we opened up the back of the house to allow for a wall of steel and glass French doors and you can already see how it allows so much light to flood into the space. Yay! With the slider to the right you can see the window that was removed for the fireplace to go in. Once the slider is on the left it shows the space as it is now: the floors are up, the stair balustrades are out, the window has been blocked up and the fireplace is in! I can’t stress how pleased I am that we decided to take that window out and put the fireplace in. Somehow it just transforms a somewhat lifeless and uninteresting room into a space that already feels charming and cozy. The closet from the back bedroom downstairs has now been blocked up and that space has been given the the downstairs bathroom. Essentially, the new walk-in shower is right where the clothes would have been hanging in the original closet. Then, that back window and wall have gone and the space has been framed out for the steel and glass French doors in the living room. This area is going to be our cozy TV nook, with the TV ‘hidden’ on the wall that the closet was originally on, so that you don’t see the TV from anywhere else in the space. Gee, the lengths us design lovers go to in order to hide a television, am I right?! 😉 As the kitchen is one of the major spaces in the beach house I have a dedicated post all about the structural and design amends we made in this space. Look out for that going live in the next couple of weeks! What I will say right now is that one of the first things I said when we walked into the house to view it was: “OK, that pony wall has to GO!”. And go it did! I’m so pleased we opened out the kitchen space and can’t wait to share the design vision for it right here very soon. 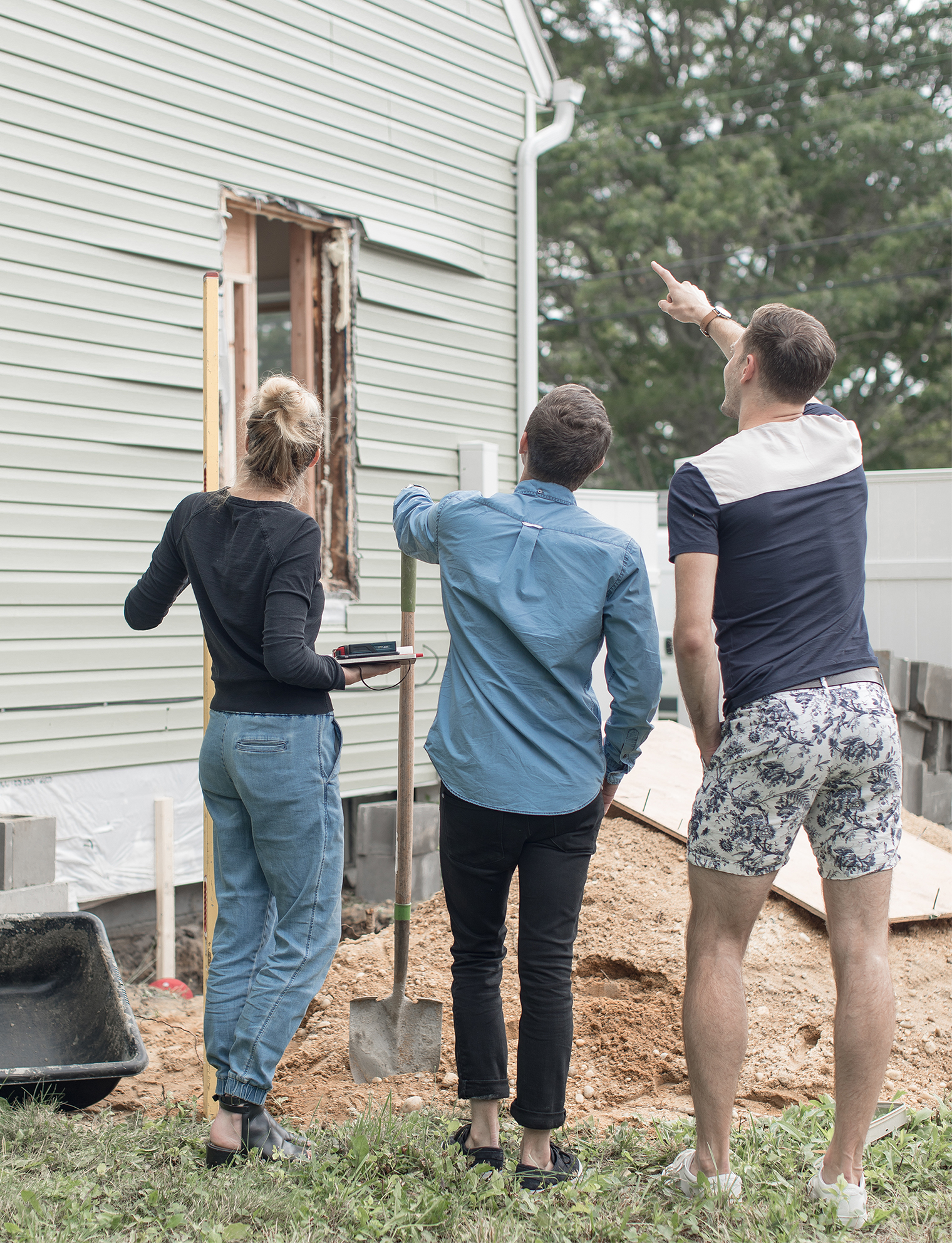 I have to give a huge thank you to our incredible contractor and project management team at City & Stone for their amazing advice and hard work on our beach house. They’ve taken our vision and made it a reality, and for that we are so grateful! If you are looking to take on a renovation of your own, whether a full house, new build or smaller project, in the New York area I highly recommend them. Here I am pictured discussing the exterior build of the new fireplace with Joe (founder of City & Stone) and Whitney from the team at one of our weekly in-person site meetings. In fact, it’s these weekly site meetings that are one of my favorite things about working with the team at City & Stone. After each site meeting they follow up with a field report that details all the actions and decisions that have been made, along with who is responsible for what. This has helped keep the project moving forward, which is so essential when there are so many moving parts. You can read more about City & Stone here as well as see some of the testimonials from past clients. Follow City & Stone’s Instagram to see sneak peeks from our beach house project, as well as their other work, too! Have a great weekend, friends! I’ll be back here next week with a post all about our changes to the layout of the house upstairs. See you then. Exploring NYC With The Delightways App Giving The Gift of Scent-iment

What I’ve Learned From Building My Home Addition